You are here: Home / Humor / The Bear Necessities 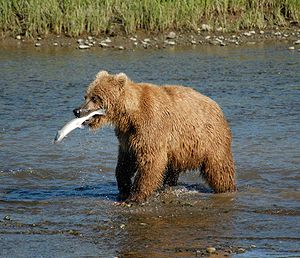 Once again I feel short-changed by my public school education.

In between learning the swear words that will really freak out their parents, and figuring out how to trade the healthy yoghurt in their lunches for a stack of cookies, all kids in North America learn that bears hibernate in the winter. This is always presented as just one of those things that bears do; nobody ever points out that this is a pretty cool trick.

Bears do this and a great deal more, apparently, and scientists are trying to figure out how. This is so we can achieve that holy grail of science: bioengineered superhumans capable of watching the entire NHL playoffs in one sitting, while consuming twice their weight in beer and pizza.

Okay, really we want to know because learning how bears hibernate will shed light on human diseases and problems. But what we’ve already learned about bears begs the question: just what else can we learn if we take another look at the special abilities of other animals? Things like:

Bees: When a bee finds a new source of pollen it goes back to the hive and does a special wiggly bum dance to tell the other bees where to find the source. If we can find a way to translate that, we may be able to figure out what some young male humans think they’re trying to say when they dance at the nightclub.

Birds: Bird do not have opposable thumbs, or even hands and arms. Yet somehow they are able to construct nests that look better than a lot of the $30 wicker baskets you can buy at the local store. Learning how they do this may help thousands of parents improve their Christmas morning “some assembly required” skills.

Deer: If we could only figure out why these animals freeze in the headlights of an oncoming car, we could capture bad guys faster. This would quickly end all those dangerous police car chases that make great television viewing but tend to be a bit hard on pedestrians.

Frogs and Toads: Once we figure out why these creatures are so dumb that they don’t hop away when you’re about to step on them, we will have the key to preventing stupidity in humans. Of course, manufacturers of extreme sports equipment may be working to suppress this knowledge already.

Hummingbirds: These tiny birds can flap their wings up to 70 times per second. Computer users everywhere want to know how they can do this and not get carpal wing tunnel syndrome.

Dandelion: Truly one of Earth’s most indestructible creatures. It knows how to survive repeated exposure to toxic chemicals, how to put down roots so deep you need an excavator to completely remove the weed, and when to duck an oncoming lawnmower (making it brighter than most toads and frogs).

Elephants: I was going to say we could learn something from this species, but I’ve forgotten what it was.

Octopi: An octopus has no backbone and will squirt ink indiscriminately if threatened. We could— no wait, never mind. Members of the press have these abilities already.

Bears: Getting back to bears and muscle tone, I’d really like to know how they can snooze all winter and still have non-flabby appendages strong enough to bring down a small tree with a single blow.